August has come, the wheel of the year turns and the harvest is upon us. Being able to enjoy the first fruits, literally and figuratively, of their spring and summer labors was understandably important to our ancestors. Spirits were high, food was plentiful, and, as is only natural, thanks was given to the gods whose influence lead to such bounty. In Anglo-Saxon England this meant celebration, and so a grand festival that came to be called ‘Lammas’ was held.

Similar festivals occurred all over northern Europe; the Gaelic Lughnasadh, for example, or Calan Aws. Those names seem to have survived the test of time, but the name Lammas, translated hlaf-mass (loaves festival), appears to have been given after our celebration was, like so much else, christianized to allow for easy assimilation. Lammas became associated with Saint Peter being sprung from prison, more specifically the ‘St. Peter In Chains’ feast. The pagan roots suffered, replaced by different traditions such as bringing baked goods to church to have them ‘blessed’, or feeding your landlord. But, thankfully, some carried on the old ways. Bread was made in the shape of Freyr, a great god of harvest and fertility, then ritually sacrificed in his honor and eaten. Also honored were Thunor and his wife Sif, she of the wheat-gold hair. Due to the disconnect between what the festival was and what Lammas became, modern Asatruar have chosen to call it something different: Freyfaxi.

The origins of this new name lay in the saga of Hrafnkel. Freyfaxi (‘Frey’ for Freyr, ‘Faxi’ means ‘eye catching mane’) was a beautiful horse owned by Freysgodi, a man dedicated to Freyr. It is a tragic moral tale, involving oaths and how they should never be taken lightly.

Freyfaxi is celebrated at any point during the month of August. It should involve feasting, preferably on things you’ve grown yourself, and offerings to the gods. I attended mine earlier in the month and if you haven’t already, it is an amazing experience to gather with your folk to eat, drink, perform ritual, spar, and even just talk as folk. It really makes all the difference. I highly recommend joining an organization such as the Asatru Folk Assembly to get yourself in touch with others locally. You won’t regret it.

The picture used above was taken at the event I attended, some of the items shown in it used in our blot to Freyr. 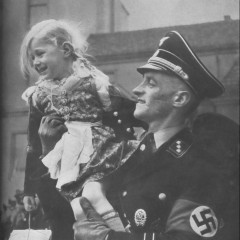